This morning the clouds were low, and the lake was grey. It could have been somewhere in England. As the clouds burned off, a few peaks appeared, and the lake turned blue under the sky.  We were watching carefully, as we’d booked a night visit to the observatory.

Harry had the idea of trying a horse trek, so we took ourselves down to the info centre, in time for a coffee at Run77. This place serves excellent coffee and snacks and meals, and has great free wifi for customers. We had a bit of a binge.

Then we booked an hour on a horse for 4pm, nearly walked out of the tourist info centre without paying for a tee-shirt, and dropped back to the cafe for our lunch. Just the ticket – Harry went carnivore again with chilli con carne, and I had a hot roast veg salad with loads of chick peas.

We turned up a bit early for our trek, but sat in the sunshine watching Charlotte and her friend get the horses saddled up. Several other people arrived, a German brother and sister from Cologne, who were spending a couple of weeks in New Zealand, and three Japanese youngsters . We had brief instructions on basic horse control, though I think the horses could have done the trip blindfolded.

Then we were settled on our horses and ready to roll. The trek took us along a path uphill from the stables, through trees, coming out above the lake. Fascinating to see how horses tackle hills , not to mention the capacity of their bladders, as one demonstrated. The ride was relaxing and absorbing at the same time. The way back followed the lake shore before turning back up through the woods to reach the trekking centre. 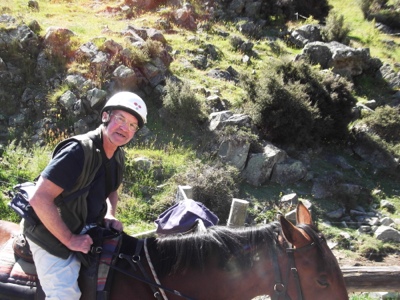 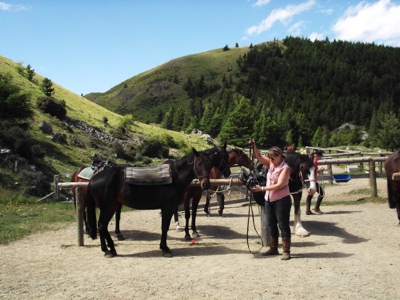 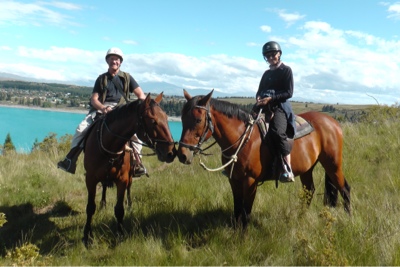