12 Dec Mount John Observatory visitYesterday our hearts sank as the cloud thickened. Minute by minute the radar watchers at the observatory told different stories. It’ll be clearer tonight. No, tomorrow will be good. No, tonight will be better, tomorrow will be worse.

We looked up. Thickening cloud, a lonely point of light. This did not look promising. We’d wait for the midnight visit. We went down to the office, and said we’d leave it until tomorrow. Another “can’t control the weather” gamble. So back home to our cocoa!

Today, things started off cloudy, but the snowy peaks came through. We distracted ourselves with a horse trek, and couldn’t believe it as the evening sky cleared, until at 10.00 it looked as though we should see plenty of stars.

We checked in, accepted the offer of a thick coat, though we looked as though we were expecting to find ourselves in the English winter. 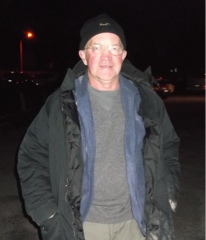 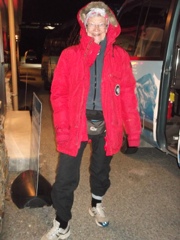 We squashed into two coaches, plumped by our jackets. The driver gave us a quick talk, then switched on a tape, with a soothing woman’s voice and some music. We stayed awake. The road to the observatory is closed at night, apart from the official buses. Even they have to switch off headlights as they climb up, and proceed on the glow-worm power of side-lights.We pile out of the buses, and divide into an English-speaking group, and a Chinese-speaking group. We make our way carefully out of the car-park, using our solar-powered key ring torches. Our guide points out some of the constellations using a laser pointer. This makes life easy for people like me!

The Southern Cross and the “pointer” stars alpha and beta-Centauri. I could find those myself, thanks to tuition from Harry. The Magellanic Clouds were as clear as I have seen them in my short experience as a stargazer. The Milky Way was glorious.

Then some of the constellations we see in the north – Orion, Canis Major rolling on his back for a tummy tickle, Taurus and Aries. The Pleiades. The planet Jupiter was clear and bright.

They had telescopes set up, so that we could view the Jewel Box cluster, one called the Wishing Well, like spread coins, and through a large telescope the Tarantula Nebula, and later Jupiter.

It was a brilliant end to our stay at Lake Tekapo.

A quick stroll before lunch.
I walk along the Timaru River road, from Johns Creek for about a mile, then for a very short stretch of the Breast Hill Track, part of a long distance walking track.

I meet a man coming down who says it’s about an hour to get to the ridge, and very steep zigzags.  It does climb very steeply, and one of my excuses for turning back is that my old trainers are not exactly suitable footwear. 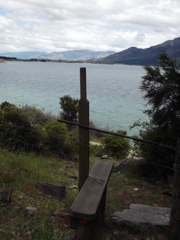 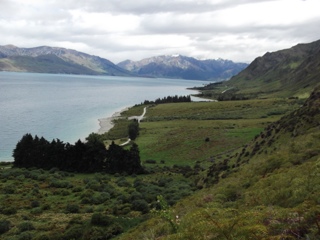 We’re sorry to leave Lake Hawea, particularly since we can now see the end of the down-under part of our trip. We pick up the same route as when we arrived in Lake Hawea, over the Lindis Pass, and as far as Omarama. Tarras, which seems to be little more than a shop, a cafe and a school, is our first stop for a decent coffee and scone.

Then it’s on towards Omarama, where we stop briefly but see nowhere enticing for lunch. Then we are driven away by the smell of a cattle truck whose driver has chosen to stop there.

We followed the Waitaki valley with its hydro scheme, but little else of interest. Even the Maori rock carvings a disappointing. Most of the interesting ones have been removed, and I learn later that some of the rocks were damaged by heavy rain fairly recently. 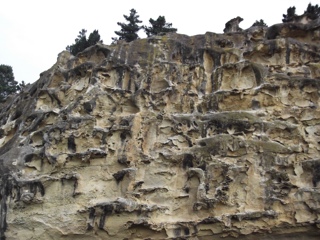 Oamaru is much bigger than I expected, with its C19 and early C20 buildings, full of post-Victorian confidence in the permanence of empire etc. we find the motel, along Thames St. Almost all the streets are named after UK rivers. Short rest and cuppa before hunting the yellow eyed penguins. They come ashore in the afternoon, and one in particular paraded about on the beach for a while. Comical to watch, like wee humans.

Next we go to the blue penguins area – you can pay to see them come home in the evenings. We book, then go grab some grub at the Portside restaurant.
At 9pm we go in to see the blue penguins start to make landfall. These guys are about a foot high, and land in groups, then hang around together before making a communal dash over the rocks and open grass to their nest areas. They look like well-behaved school groups, with the odd rebel, natch.

You can see them coming in in “rafts”, grouping together before they land. The whole show goes on for a good hour, and the noise increases in volume as more and more birds arrive. No photography allowed, and we are seriously supervised to ensure that no one cheats!
Another little touch of enchantment on this holiday.

In the morning I panic!   Help! My I-pad is jammed. Defunct. Dead. Not I hope, an ex-i-pad. We go into Oamaru computer shop, and the first person is as flummoxed as I am. A woman passing by asks, “Have you tried switching on and pressing the wake up button at the same time?”. It works – that’s how to reboot the I-pad.

Now coffee and cakes, a look at a local art show, then a visit to the lookout point high above the town.

The global signpost grabs my attention as usual. I do like my facts and figures.
London  19,200 km 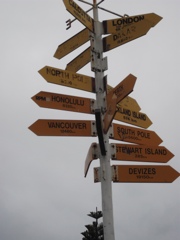 Nowhere before Timaru looks much of a place to stop. Timaru has lots of shops and cafes, and free Internet in the library too. As a result it’s getting on for 4pm when we leave.

We think a cup of tea en route would be good, but have forgotten that rural New Zealand likes to shut its cafes early. So we have a break and a stroll and push on through more traffic than we’re accustomed to.
Motel, car return, dinner at the Flight Lounge, another nearby motel. A litle expensive, but a pretty good meal. Then back, and before too long, blog and bed. This may be near the airport, but Heathrow it isn’t.

19th Dec 2012
Rainy morning in San Francisco
Cold and wet in the valley of the mills
Where is the light of the southern summer?
I’ve got the northern hemisphere winter solstice blues.

I wake up to the sound of hissing rain
windows are sunless, outside leaves are wet.
Sky is weighed down with lightless cloud
And at nine in the morning the lamps are lit

We don’t do proper winter out here in California,
Cool and fresh baby, all year round,
Summer’s warm and dry, though winter can be wetter
I’ve got the northern hemisphere winter solstice blues.

And even then, SF has two hours of daylight more than London. And Christmas lights sparkle in the gloom.